Catch the latest news happening in the media for Evero Engineering, Wangaratta

Girls of Steel at Evero Engineering

GIRLS OF STEEL: Jane Hume, Minister for Women’s Economic Security, and Liberals’ candidate for Indi, Ross Lyman visited Wangaratta-based business Evero this week. The business is participating in the Girls of Steel program, which the Federal Government has invested more than $1 million to help get young women into apprenticeships that are traditionally male emanated, such as mechanics and electricians.

Registrations are now open for the second intake of students. Those who are interested should register at www.bit.ly/girlsofsteel

Government backs local program to get women into engineering trade 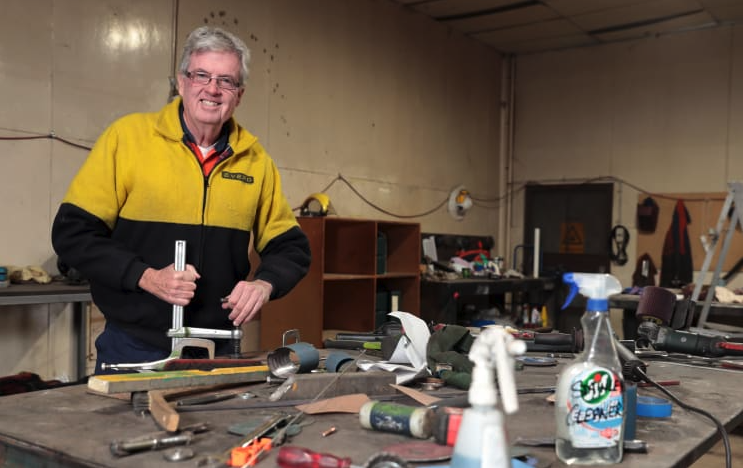 Government backs local program to get women into engineering trade

GIRL power is at the forefront of a new program starting in Wangaratta, where both engineering and life skills will support up to 40 young women in finding employment.

Buoyed by just under $1.2 million in Federal Government funding, local not-for-profit organisation The Skill Engineer is tackling long-term unemployment with its two year ‘Girls of Steel’ program, which gets underway next week.

”Last year, one of the big talking points was that women were going to be the ‘losers’ of the COVID-19 situation,” he said.

“We had to think about what we can do to help and came up with the idea of offering a 12 month program for young girls and women in an identified demographic group; long term unemployed aged between 17 and 24.

“We would have 1- participants here at Evero and 10 at our other site in Gosford and over two years train 40 women all up.

“So we put a proposal to the Premier and Cabinet last September and we heard about five weeks ago that we’d received just under $1.2 million in finding for the two years.

“Thanks to the funding, the program will be completely free for participants and they will be put through a Certificate I in Work Skills and a Certificate II n Engineering Pathways.

“This will help them with things like getting their drivers’ licence, money management, budgeting and supporting their ideas for businesses.

“The plan, then, is I’ll happily take on two or three of them as apprentices at Evero and through my network in the industry will aim to get the rest jobs around the region.

“This program is just the starting point, we all know it’s a journey not a sprint and this will give them a good solid start in the trade.”

Mr Ritchens said although there are only 20 spots in each 12 month program, and 10 at the Wangaratta site, there is opportunity for more.

“The great thing about this is, because it’s run through my not-for-profit, if someone in the program leaves because they got an apprenticeship somewhere we can easily replace them and give that spot to a whole new person,” he said.

“Because we’ve got my commercial company to fall back on, and participants will be around live sites and projects, it’s got a bit of security there.

“I’ve found that any woman in a male-dominated trade generally has to be twice as good to be seen as half as good as the blokes.

“In my experience there are no negatives when women enter the trade force because they know what they’re up against and they work a lot harder and they ray attention to the finer stuff that really matters.

“I’ve found the blokes are much more respectful in the workshop too so it just makes sense.

“What we’re developing here will be the start; the bigger plan is to chase funding for other similar projects working with young people with disabilities, kids kicked out of school, indigenous kids, young people from custodial sentences, kids who may not be fitting in the mainstream.

“I want to give them a fair start.”

The program will begin on July 12 with interested girls and women still encouraged to apply now. 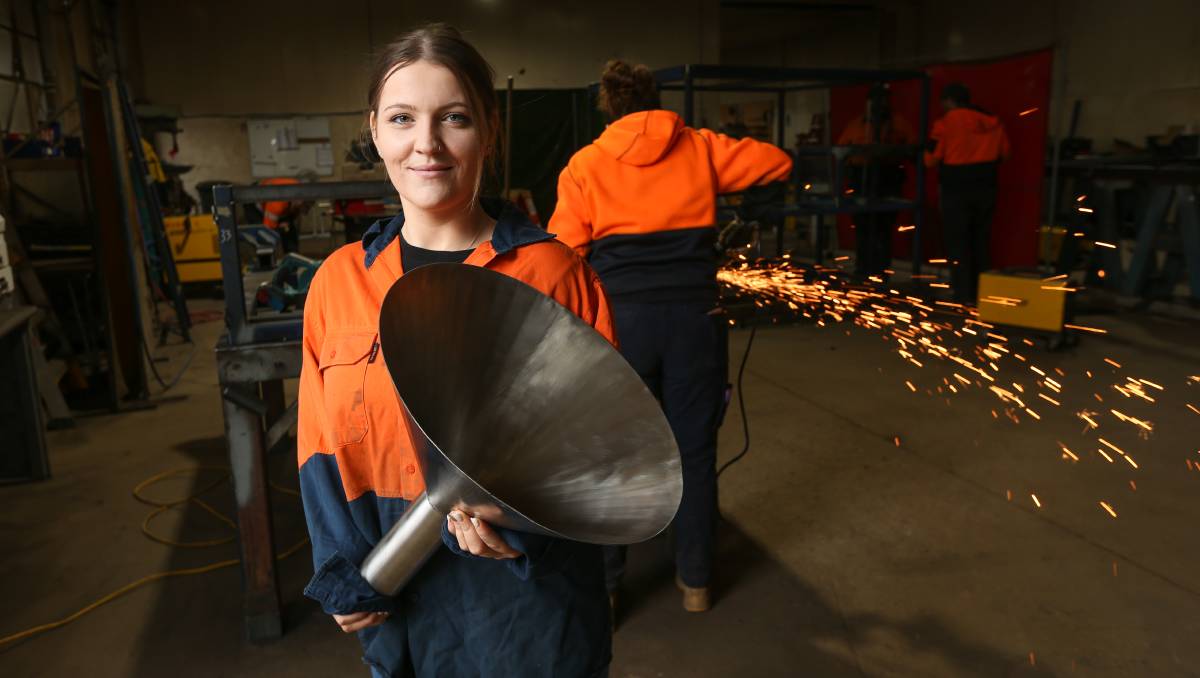 Image: TAKING CHARGE: Wangaratta’s Brittany Gibbs is holding a funnel, which by the time she gets to the end of the 12 month Girls of Steel training course she will be able to make herself.

A young Wangaratta woman is determined to set her career on a non-traditional new path by completing an engineering training course being run for the first time.

Brittany Gibbs will next week start the Girls of Steel program, which teaches young women from disadvantaged backgrounds foundational engineering skills in a hands-on, workplace-based training environment and connects them with a job at the end.

Ms Gibbs left school after year 10 and has many jobs, including in administration and hospitality, but none of them stuck.

“I like hospitality, but I’m a bit over it now,” she said.

“Hopefully I get an apprenticeship afterwards and then I can go into the mines in a few years.”

Ms Gibbs said that she’d found it hard to find full time ongoing work, but she hoped the course would be the first step in a lifelong career.

The program will be run by The Skill Engineer social enterprise with $1.2 million of federal government funding.

“Often for young women it’s not a consideration because they’ve been told it’s not a job for them, whereas it simply is,” he said.

“I have young women who are apprentices at my work and they do every bit, they are better apprentices than most of the guys I’ve got. The gender thing isn’t and shouldn’t, be an issue.”

Nationally, just over 12 per cent of the engineering labour workforce is female.

Ms Gibbs said it was harder for young women to get into the industry.

“Unless you kind of grow up around it, it can be hard to do something different. I was a bit nervous getting into something when there’s just men; I think because there’s more competition because you’ve got to sort of prove yourself to them. When I was getting shown all the stuff on the computer I was like, ‘that’s awesome, I want to do that’,” she said.

Mr Ritchens, an engineer himself, said it would be an opportunity for participants to learn an “exceptional trade”.

“The other pastoral care side of this is teaching the participants how to turn up on time, how to behave in the workplace, dress appropriately, create that work ethic,” he said.

“The hours will support any women that may have young children, so they don’t have to pay for childcare.”

He said he wanted participants to finish the course ready for the workplace, so he’d also support participants to get their driver licence, teach them business acumen and budgeting.